DRIVING IN A ROUNDABOUT

In Switzerland the traffic rules are contained in the “Federal Law on Road Traffic (LCR)” which is completed by the “Ordinances on road traffic rules (OCR)“.

Although these set rules concerning priorities at the entrance to a "roundabout", priorities when driving inside it and the obligations related to the use of indicators when changing lanes or leaving this type of intersection (Art.41b), nothing defines the position that should be adopted, particularly in a roundabout intersection with several traffic lanes, which creates a number of conflicting situations, everyone thinking they had the law on their side!

In an attempt to fill this apparent gap, the services responsible for traffic have defined a certain number of “recommendations” which therefore only have the value of recommendations but which are in line with European practice in this area. These recommendations identify in particular the behavior to adopt when driving in a roundabout with several lanes. As such, it is recommended to:

A notable singularity is indicated in these rules of use when you drive on a two-lane road before entering a roundabout which itself has 2 lanes and whose road on which you enter at the exit of this Giratoie one-way intersection also has two lanes:

if you enter by driving in the left lane before the roundabout, you will continue to drive in the left lane inside it and will leave it, always staying on the left - insofar as you do not cross not clear the way to another vehicle during this manoeuvre. Concretely this means that if two vehicles are driving side by side when entering the roundabout and both have clearly indicated their intention to exit at the next exit, it is perfectly fine for them to continue driving side by side and exit same time of the crossroads with direction giratoie, one on the right lane, the other on the left lane!

Basic rules proposed by the TCS concerning driving in roundabouts

One of the best explanation 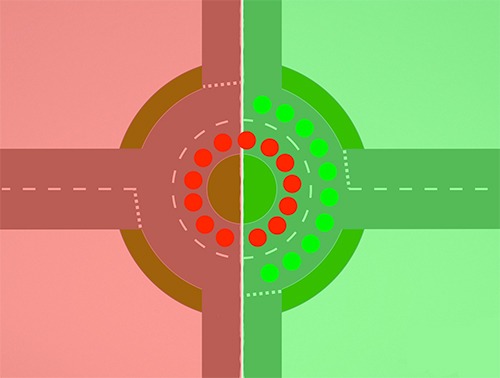 To make it simple, we draw an imaginary line in the middle of it, as if to cut it in 2:

No matter the number of outings, it's always the same! 🙂

We use cookies to provide the services and features offered on our site and to improve the experience of our users. Cookies are pieces of data that are downloaded or stored on your computer or other device. By clicking on "Accept all", you accept the use of cookies.
Accept all Rejeter
Manage consents

This website uses cookies to improve your experience while you navigate through the website. Out of these, the cookies that are categorized as necessary are stored on your browser as they are essential for the working of basic functionalities of the website. We also use third-party cookies that help us analyze and understand how you use this website. These cookies will be stored in your browser only with your consent. You also have the option to opt-out of these cookies. But opting out of some of these cookies may affect your browsing experience.
Necessary Toujours activé
Necessary cookies are absolutely essential for the website to function properly. These cookies ensure basic functionalities and security features of the website, anonymously.
functional
Functional cookies help to perform certain functionalities like sharing the content of the website on social media platforms, collect feedbacks, and other third-party features.
Performance
Performance cookies are used to understand and analyze the key performance indexes of the website which helps in delivering a better user experience for the visitors.
Analytics
Analytical cookies are used to understand how visitors interact with the website. These cookies help provide information on metrics the number of visitors, bounce rate, traffic source, etc.
Advertisement
Advertisement cookies are used to provide visitors with relevant ads and marketing campaigns. These cookies track visitors across websites and collect information to provide customized ads.
others
Other uncategorized cookies are those that are being analyzed and have not been classified into a category as yet.
Enregistrer & appliquer

Thank you, your request has been sent to us.

We will get back to you shortly.